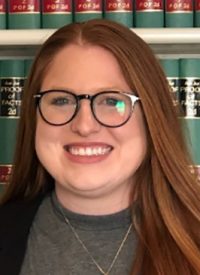 A lysia J. Remaley joined Marmero Law in October, 2020. She joins the firm with extensive experience in representing both plaintiffs and defendants in all aspects of civil litigation, from initial complaint to final disposition. Since becoming an attorney in January, 2015, her main concentration has been in labor and employment, discrimination and retaliation, and education matters, although she has appeared throughout the State of New Jersey on a number of criminal, family, and municipal matters. She has also appeared on briefs to the New Jersey Office of Administrative Law, New Jersey Superior Court, Law Division and Appellative Division, and the District of New Jersey and Third Circuit.

Prior to law school, Alysia is a life-long athlete, playing both Women’s Soccer and Lacrosse at her alma mater, Immaculata University, serving as Women’s Lacrosse Defensive Captain her senior year. As such, she understands the importance of teamwork and cooperation while working towards a common goal. When she is not practicing law, you can find Alysia hiking, camping, skiing or fishing, or enjoying time with her son and dogs.

At Marmero Law, Alysia currently represents various municipalities as solicitor, labor counsel, and of counsel in issues involving labor and employment and other litigation matters.