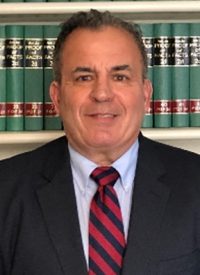 Charles A. Fiore became “Of Counsel” to the Marmero Law Firm in October of 2020. His primary responsibilities consist of representing local municipalities and governmental entities as general counsel as well as labor law and other specialized areas.

Chuck has served in a variety of governmental positions over his 32 year career. These include the position of Gloucester County Prosecutor from 2017-2020, Director of Law/Solicitor for Monroe Township, Gloucester County from 1995-2017, Planning Board/Zoning Board Solicitor for City of Woodbury 2013-2017, Hearing Officer for the City of Millville from 2014-2017 as well as served as municipal prosecutor and public defender in several municipalities over the years. Chuck had a successful general practice, specialized in many areas of the law from 1991-2017.

He received his Bachelor of Arts in Political Science from Rutgers University in Camden, New Jersey in 1981 and went on to receive his law degree in 1987 from George Mason University located in Arlington, Virginia. He was admitted to the Bar in the State of New Jersey and the Commonwealth of Pennsylvania in 1988.