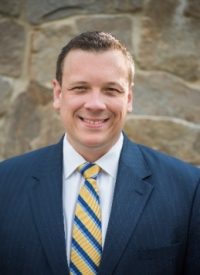 John A. Carleton joined Marmero Law, LLC in March 2019. Prior to joining the firm, John was an Associate for Schroeder Law Group with a concentration on Municipal Law and Real Estate Law. John has been an attorney for over 14 years and has extensive experience in civil litigation. He has handled all aspects of litigation including contract and labor law as well as employment dispute/resolution. He also has experience participating in arbitrations, judicial conferences, settlement negotiations and trials.

John was elected to serve a three-year term beginning in 2016 on the Woolwich Township Committee. He is proud to have been unanimously appointed by a bipartisan Committee to serve as Deputy Mayor in 2018. While on Township Committee, John served as liaison to the Business and Economic Development Advisory Committee, Kingsway High School, the Woolwich Joint Municipal Court and the Swedesboro-Woolwich Fire Department. John believes his valuable experience as an elected official allows him to better assist the firm’s clients in developing strategies to overcome the vast challenges they encounter.